Before suiting up as Marvel’s Falcon again on Disney+, Anthony Mackie produces and stars in “Outside the Wire,” a futuristic action vehicle that thinks inside the box and feels as generic as its title. Netflix has found an eager audience for such adrenaline-rush movies — perhaps especially with theaters hobbled — but this is a wire-thin addition to the “You might like” tier.

Set in 2036, the film uses shorthand to set up just about everything, as if racing past the plot to get to the automatic-weapons fire. (Although the project centers on a remarkably human-like android, the production design looks like it’s from at best the day after tomorrow, but let’s not sweat the details.)

Said android — a next-generation biotech prototype — is Leo (Mackie), who has requested help from a drone pilot named Harp (“Snowfall’s” Damson Idris) to thwart insurgents seeking nuclear weapons in Eastern Europe. The two head out into a perilous militarized zone on their mission, where the vaguely defined threat allows for a lot of violence that’s part war movie, part espionage thriller.

Harp, who is introduced getting in trouble for defying direct orders, seems understandably confused why he’s been drafted for this James Bond-style exercise, but Leo assures him, “I’m special enough for both of us.” Still, other than revealing that he’s different when his shirt comes off, nothing about Leo feels particularly artificial, superhuman or android-y.

Yes, there’s a lot of shooting and jumping and fighting, but other than the deployment of more conventional robot soldiers, those waiting for Leo to do something fantastic will likely come away disappointed — Mackie basically plays him as a tough guy in a bad mood — leaving behind pretty standard action material.

The vibe is thus closer to a buddy action movie (the squabbling pairs are often somehow mismatched) than something like “Robocop,” which is what the description brings to mind. The ostensible villain and supporting cast — including “House of Cards'” Michael Kelly as Harp’s commander — proves mostly an afterthought.

Directed by Mikael Håfström, “Outside the Wire” can charitably be compared to the kind of “B” movies that studios used to churn out, and is best consumed by tempering expectations accordingly. Because unlike its futuristic hero, there’s nothing special about it.

“Outside the Wire” premieres Jan. 15 on Netflix. 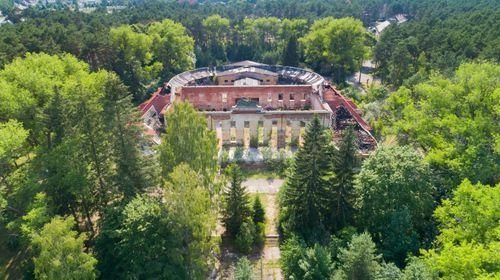