Education: Bachelor’s in education from the University of Missouri, master’s in divinity from Southern Baptist Theological Seminary, master’s in healthcare administration from MU

What is your position on Amendment 3?

This is a hot-button issue for a reason. I am opposed to Amendment 3.

Our Senate district voted just two years ago for Clean Missouri to clean up Jefferson City and bring back fair maps to our state. And this district voted for it at 72% of the vote, and Caleb Rowden was our senator and he marshaled through the overturn of the will of the people in bringing about this attempt to try and do something new.

The new amendment doesn't do anything to improve the ethics laws, but it puts the maps back into the hands of partisan politicians. Clean Missouri was an initiative petition with voters, and it came from the voters, while Amendment 3 was passed literally by politicians for their own gain. I believe our senator in this district should represent the will of the people, hard stop.

How will Medicaid expansion affect the 19th District?

One thing I've always said about Medicaid expansion, and I've been fighting for it for my whole career ... that is the gap is the health care gap where low-income workers can have something they can fall back on for health insurance when they're working two jobs or even one job that doesn't offer health insurance.

So as the law is for the low-income worker, Medicaid expansion would have made that possible. And I've been working for it my whole life. I mean, I feel like this is, I was so happy when it passed, it will have a huge effect on this district, first of all, we have a safety net hospital here that sees people even if they're not covered. And when low-income working families have no access to Medicaid as coverage, they still get sick and injured and the hospital is the one that bears the brunt, so it'll be a new revenue stream for hospitals in our area.

And, you know, my, my opponent likes to talk a lot about how much ... he's done for the university but all of that is minuscule compared to what could have been done by passing Medicaid expansion seven years ago and taken all of the benefits of that. Instead he voted against it every time. And this past August, the district voted for it was 63% of the vote so our district wants and knows and understands the importance of the Medicaid expansion into the insurance gap. And people want affordable health care, and they deserve it.

Additionally, you know we have rural communities who have lost hospitals and Cooper County Hospital in our Senate district was forced to close suddenly in January, and Medicaid expansion could have prevented that. Some people say that's, that's not the case that it was mismanagement, but honestly, you know, Cooper County could have probably survived without an outside management company coming in had they had Medicaid expansion.

So I am very passionate about this issue and want to go down and be the senator that makes sure that we implement Medicaid expansion fully.

Heck no. And there's proof in the pudding and that we are in the top five of hot spot states.

The state's Republican leadership has done not done nearly enough to address the problem, and whatever they did do they didn't do it early enough. There's a sense that they don't believe the science of wearing masks, social distancing, testing, contact tracing. Had there been a coordinated, organized effort to do these four things, we would not have reached the top five hot spot states.

Just recently, that in itself caused us to have to delay opening our schools and businesses. So I would like, I would just like to say that the Republican politicians bungled this whole thing. And we now have to look forward and focus on recovery. I've proposed an agenda that I put out last week for just that to pretty much look at the whole system and to repair our tattered safety net and extend resources to ... our most vulnerable neighbors, and make sure that people get health care treatment that they need and don't get left behind when we rebuild our economy. A lot of the tax breaks and a lot of the COVID money went to people at the top 1%, and I'm interested in the bottom 99%.

It sure would have been nice to really tackle the bigger issue that would have a bigger impact. I mean they got a few small things passed. And I'm glad that a few of the things that they wanted to pass didn't get passed.

My opponent voted essentially for teenagers to be tried as adults and end up in adult prisons possibly. I think that that's the wrong way to go. I want us to build the Missouri we deserve. And a big part of that is to reform our criminal justice system. We need to address the root causes for everything from criminal behavior to police behavior.

I support our police and thank them repeatedly for handling the most difficult of situations. However, that doesn't mean we can't always improve on how we recruit, train and pay the force. And we need to focus on restorative justice and I think that we're, you know the community is talking about that, and I think the conversations that are going on are important and need to be supported. I have a series of things that I would like to specifically do for criminal justice reform. I'd like to have better supports for re-entering citizens, our prisoners that are re-entering society. I would also repeal Senate Bill 600, that Caleb Rowden voted for in the General Assembly, and because that takes away the judges' ability to use their discernment in sentencing. And you know what, all that's going to do is build more prisons instead of solve the problem from happening in the first place. We are already at the top for incarceration per capita. So I'd like to see us repeal SB 600. You know there's a bipartisan effort to want to do that. And it was passed in a very partisan way.

I will want to pass some sensible police reforms like banning the chokehold that we saw in the George Floyd case. In addition, I would like to make sure that we have a statewide policy for the duty to intervene. So when an officer sees something ... he or she can do something, if they, he or she thinks that the excessive force is being used. And finally, I would work on the root causes, like health care and education access and equity, and more economic mobility which is laid out in some of my other policies. 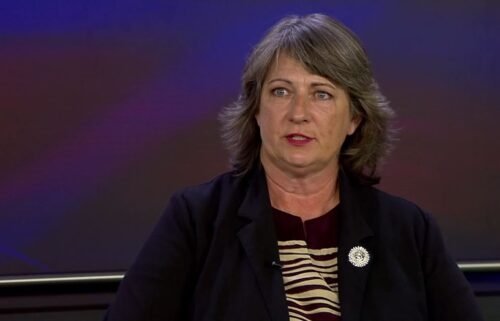