Parwana Malik, a 9-year-old girl with dark eyes and rosy cheeks, giggles with her friends as they play jump rope in a dusty clearing.

But Parwana’s laughter disappears as she returns home, a small hut with dirt walls, where she’s reminded of her fate: she’s being sold to a stranger as a child bride.

The man who wants to buy Parwana says he’s 55, but to her, he’s “an old man” with white eyebrows and a thick white beard, she told CNN on October 22. She worries he will beat her and force her to work in his house.

But her parents say they have no choice.

For four years, her family have lived in an Afghan displacement camp in northwestern Badghis province, surviving on humanitarian aid and menial work earning a few dollars a day. But life has only gotten harder since the Taliban took power in Afghanistan on August 15.

As international aid dries up and the country’s economy collapses, they’re unable to afford basic necessities like food. Her father already sold her 12-year-old sister several months ago.

Parwana is one of many young Afghan girls sold into marriage as the country’s humanitarian crisis deepens. Hunger has pushed some families to make heartbreaking decisions, especially as the brutal winter approaches.

The parents gave CNN full access and permission to speak to the children and show their faces, because they say they cannot change the practice themselves.

“Day by day, the numbers are increasing of families selling their children,” said Mohammad Naiem Nazem, a human rights activist in Badghis. “Lack of food, lack of work, the families feel they have to do this.”

Abdul Malik, Parwana’s father, can’t sleep at night. Ahead of the sale, he told CNN he’s “broken” with guilt, shame and worry.

He had tried to avoid selling her — he traveled to the provincial capital city Qala-e-Naw to search unsuccessfully for work, even borrowing “lots of money” from relatives, and his wife resorted to begging other camp residents for food.

But he felt he had no choice if he wants to feed his family.

The money from Parwana’s sale will only sustain the family for a few months, before Malik has to find another solution, he said.

Parwana said she hoped to change her parents’ minds — she had dreams of becoming a teacher, and didn’t want to give up her education. But her pleas were futile.

Qorban didn’t describe the sale as a marriage, saying he already had a wife who would look after Parwana as if she were one of their own children.

“(Parwana) was cheap, and her father was very poor and he needs money,” Qorban said. “She will be working in my home. I won’t beat her. I will treat her like a family member. I will be kind.”

Parwana, dressed in a black head covering with a colorful floral garland around her neck, hid her face and whimpered as her weeping father told Qorban: “This is your bride. Please take care of her — you are responsible for her now, please don’t beat her.”

Qorban agreed, then gripped Parwana’s arm and led her out the door. As they left, her father watching by the doorway, Parwana dug her feet into the dirt and tried to pull away — but it was no use. She was dragged to the waiting car, which slowly pulled away.

Since the Taliban’s takeover, stories like Parwana’s have been on the rise.

Though marrying off children under 15 is illegal nationwide, it has been commonly practiced for years, especially in more rural parts of Afghanistan. And it has only spread since August, driven by widespread hunger and desperation.

More than half the population is facing acute food insecurity, according to a United Nations report released this week. And more than 3 million children under age 5 face acute malnutrition in the coming months. All the while, food prices are soaring, banks are running out of money and workers are going unpaid.

Nearly 677,000 people have been displaced this year due to fighting, according to the UN Office for the Coordination of Humanitarian Affairs (UNOCHA). Many of them live in tents and huts in internal displacement camps like Parwana’s family.

“It’s absolutely cataclysmic,” said Heather Barr, associate director of the women’s rights division at Human Rights Watch. “We don’t have months or weeks to stem this emergency … we are in the emergency already.”

The problem is particularly acute for Afghan girls, who have stayed home and watched their brothers return to secondary school since the Taliban takeover. The Taliban said it is working on a plan to allow girls to return too, but have not said when that could happen or what conditions may be imposed.

The uncertainty combined with rising poverty has pushed many girls into the marriage market.

“As long as a girl is in school, her family is invested in her future,” said Barr, from Human Rights Watch. “As soon as a girl falls out of education, then suddenly it becomes much more likely that she’s going to be married off.”

And once a girl is sold as a bride, her chances of continuing an education or pursuing an independent path are close to zero.

Instead, she faces a much darker future. Without access to contraception or reproductive health services, nearly 10% of Afghan girls aged 15 to 19 give birth every year, according to the UN Population Fund (UNFPA).

Many are too young to be able to consent to sex and face complications in childbirth due to their underdeveloped bodies — pregnancy-related mortality rates for girls aged 15 to 19 are more than double the rate for women aged 20 to 24, according to UNFPA.

‘I don’t want to leave my parents’

Magul, a 10-year-old girl in neighboring Ghor province, cries every day as she prepares to be sold to a 70-year-old man to settle her family’s debts. Her parents had borrowed 200,000 Afghanis ($2,200) from a neighbor in their village — but without a job or savings, they have no way of returning the money.

The buyer had dragged Magul’s father, Ibrahim, to a Taliban prison and threatened to have him jailed for failing to repay his debt. Ibrahim, who only goes by one name, said he promised the buyer he would pay in a month. But now time is up.

“I don’t know what to do,” Ibrahim said. “Even if I don’t give him my daughters, he will take them.”

Like Qorban, the buyer claimed he would not mistreat Magul and that she would simply help with cooking and cleaning at his home. But the reassurances ring hollow in the face of his threats against Magul’s family.

“I really don’t want him. If they make me go, I will kill myself,” Magul said, sobbing as she sat on the floor of her home. “I don’t want to leave my parents.”

It’s a similar situation for a nine-member family in Ghor province that is selling two daughters aged 4 and 9. The father has no job, like most in the displacement camp — but he faces even tougher odds with a disability.

He is prepared to sell the girls for 100,000 Afghanis (about $1,100) each. Zaiton, the 4-year-old, with wispy bangs and large brown eyes, said she knows why this is happening: “Because we are a poor family and we don’t have food to eat.”

Their grandmother, Rokhshana, is distraught.

“If we have food and there is someone to help us, we would never do this,” Rokhshana said through tears. “We don’t have any choice.”

Local Taliban leaders in Badghis say they plan to distribute food to stop families selling their daughters. “Once we implement this plan, if they continue to sell their kids we will put them in jail,” said Mawlawai Jalaludin, a spokesperson from the Taliban’s Justice Department, without elaborating.

But the problem stretches beyond just Badghis. And as winter approaches, both the Taliban and humanitarian groups are pleading for more aid, hoping it could stem the rise in child marriages.

The Taliban’s rapid takeover of Afghanistan as the United States and its allies withdrew prompted the international community to halt development assistance — money that had been vital in propping up the country’s economy and key services.

Countries and multilateral institutions have been reluctant to renew pledges for fear of appearing to legitimize the Taliban as Afghanistan’s leaders.

With the country’s economy close to collapse, UN donors pledged more than $1 billion in humanitarian aid in September, of which $606 million would meet Afghans’ most pressing needs. But less than half those pledged funds have been received, with some member states who have not yet paid, according to a UNOCHA spokesperson.

Several of the families and experts CNN spoke with expressed frustration at the shortage of aid during the country’s direst hour.

Isabelle Moussard Carlsen, head of office at UNOCHA, emphasized that humanitarian aid workers were still on the ground, providing relief and supporting hospitals — but it’s not enough.

“By not releasing the (development) funds that they are holding from the Taliban government, it’s the vulnerable, it’s the poor, it’s these young girls who are suffering,” Carlsen said.

Barr and Carlsen acknowledged the need for world leaders to hold the Taliban accountable for human rights violations — but they warned the longer Afghanistan goes without development assistance or injected liquidity, the more families face death by starvation, and the more girls are likely to be sold.

The Taliban has also appealed for aid. “The Taliban is asking aid agencies to come back to Afghanistan and help these people,” said one Taliban director of an internal displacement camp in Ghor province. “I’m requesting the international community and aid agencies, before the winter comes, to please come and help.”

Back in the Afghan displacement camp in Badghis province, Malik is under no illusions about what the sale means for his daughter — or what the grim situation means for his family’s future.

Qorban said he will use his daughter as a worker not a bride, but Malik knows he has no control over what happens to her now.

“The old man told me, ‘I’m paying for the girl. It’s none of your business what I’m doing with her … that’s my business,'” Malik told CNN.

The ominous warning weighs heavily on him as he considers the bleak days ahead. The cold is creeping in, and snow has already begun coating parts of the country. When the money from Parwana’s sale runs out, he will be back at square one — with three daughters and a son still at home to support.

“As I can see, we don’t have a future — our future is destroyed,” he said. “I will have to sell another daughter if my financial situation doesn’t improve — probably the 2-year-old.” 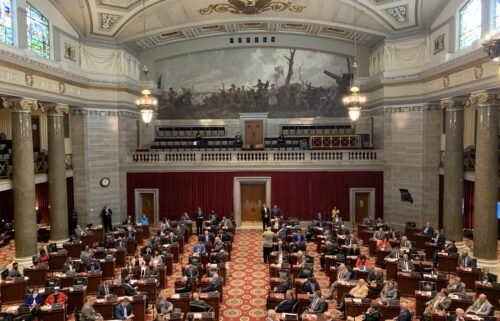