There are only about 200 California condors in the wild in California, but for some reason, 15 to 20 of the massive birds decided to congregate in one location — on a woman’s deck.

Cinda Mickols, who lives about two hours outside Los Angeles in Tehachapi, California, told CNN that she was coming back into town Monday when her neighbor sent her the first picture of her temporary visitors.

Mickols, 68, had seen condors on her property before, but she was not prepared for what she found.

“When I walked up to my (side) deck where they were sitting on my spa … I waved my cane and said, “OK, guys, party’s over!” and some of them started to fly away,” said Mickols, who is 5-foot, 3-inches tall. “But when I went in my house and went out my back deck … they flew away … especially when I got the hose out.”

Condors are an endangered species and one of the largest flying birds in the world. Their wingspan can spread almost 9 feet and they can weigh more than 20 pounds. In the 1970s, only a few dozen were left in the wild, according to the California Department for Fish and Wildlife.

Because of their endangered status, solutions for removal cannot include anything that could hurt the animals, but residents are allowed to make loud noises and use water to get the birds off their property.

Mickols said she has been using the tactic with other condors who have decided to perch on her roof in the last five days, mostly because of the damage they caused. The birds knocked down planters, shredded her spa cover, and pooped all over her deck.

Her daughter, Seana Quintero of San Francisco, shared images of the mess that quickly went viral on Twitter. But Mickols said she’s mostly happy that the species is rallying.

“This is a good news story,” she said. “The condors are coming back from extinction. They are welcome to be around, but I want them off my house now.”

There is no explanation as to why they chose her home, but Mickols liked how one of her daughter’s Twitter followers put it — she must live in a “condor”-minium.

“Nature is amazing,” she concluded. 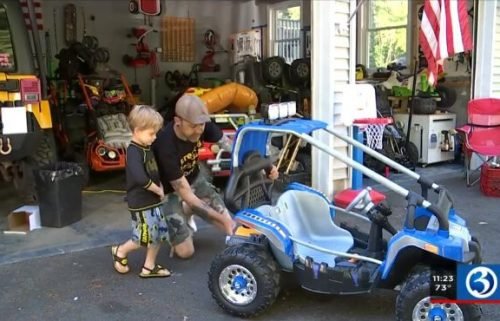