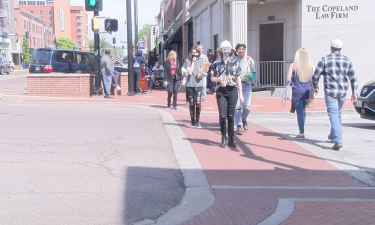 The Columbia City Council voted Tuesday to take part in a pilot program that will gather data on tobacco retailers in the city.

The program will run until Aug. 22.

City leaders have been considering several ways to regulate tobacco products in an effort, in part, to reduce the number of teenagers who use vaping products such as JUUL.

In November, the council reviewed a report from the Columbia/Boone County Board of Health asking the council to temporarily ban the sale of flavored e-cigarette products within city limits.

A group of people protested the idea of a temporary ban using the slogan "We vape we vote." They stated there are already preventative steps to keep teenagers from smoking.

The council ultimately decided to ask the board for a more in-depth report.

In December, the Youth Advisory Council presented recommendations to the council to reduce the number of youth abusing e-cigarette products. The group wanted the council to consider regulating flavored nicotine products and potentially look into a minimum price requirement.

"This is part of our own ability to have the technical resources to know who's selling tobacco and nicotine products within the community and are they licensed, and then providing a framework for community education," said ward 2 council member Mike Trapp.

He said the program will also give data that could help city leaders come up with new regulations if they feel it is necessary.

“So this will at least give us a bottom-line list of kind of who’s intros space and when we have that more information we might be able to design future proposals based on public health needs,” he said.