If a hurricane is headed your way, don’t panic. There are many steps you can take to protect yourself, your loved ones and your property. To help you get started, CNN created this downloadable checklist for those who may end up in the path of a dangerous storm.

Here’s what else you need to know to Get Up to Speed and On with Your Day.

A hurricane watch has been issued for the west coast of Florida as now Hurricane Ian threatens to soon arrive packing powerful winds and dangerous storm surge. According to the National Hurricane Center, lan grew to hurricane strength this morning with winds of 75 mph and even higher wind gusts. Models project different scenarios about where it could make landfall in Florida, and how strong it could be by midweek. While Ian’s exact path remains uncertain, Florida Gov. Ron DeSantis has activated the National Guard, saying its impacts will be broadly felt throughout the state.

Russian President Vladimir Putin’s threat of using nuclear weapons in his invasion of Ukraine “could be a reality,” Ukrainian President Volodymyr Zelensky said in a CBS interview that aired on Sunday. “I don’t think he’s bluffing,” he added. Zelensky’s comments come just days after Putin raised the specter of nuclear war during an address last week. In Russia, heated protests have erupted following Putin’s mobilization announcement. More than 2,350 people have since been detained, according to an independent monitoring group, as Putin has made wartime punishments for various offenses more severe amid increasing opposition to the invasion.

A NASA spacecraft will deliberately slam into an asteroid today to determine if this kind of mission can help deflect space objects posing a threat to Earth. The NASA Double Asteroid Redirection Test — or DART– aims to make history today at 7:14 p.m. ET when it makes impact with the asteroid. The DART spacecraft is about the size of a school bus and has been traveling to reach its target since launching in November 2021. The spacecraft is also carrying an imager that will share a live stream of photos as it nears the asteroid, providing a video-like experience for viewers. A live broadcast will kick off on NASA’s website beginning at 6 p.m. ET today, and it will last until 7:30 p.m. ET. Then, the space agency will hold a post-event briefing to discuss what happened.

Many Americans are bracing for the cold reality that they will have to shell out more money this year to keep their homes warm during the winter. Families are expected to pay an average of 17.2% more for home heat this coming season, compared to last winter, according to the National Energy Assistance Directors Association. This brings the two-year hike to more than 35%. Those who heat their homes with natural gas are facing the largest spike, with their costs expected to soar 34.3% to $952 for the season, the association said. Heating oil is expected to jump 12.8% to $2,115. And those whose heat runs on electricity can expect to see a nearly 7% increase to $1,328. Some people may not realize that energy bills will be costlier this winter, especially since gasoline prices had been falling for months.

Giorgia Meloni has claimed victory in a general election that seems set to install her as Italy’s first female prime minister, leading the most far-right government since the fall of Benito Mussolini. “Starting tomorrow we have to show our value… Italians chose us, and we will not betray it, as we never have,” Meloni said. A 45-year-old mother from Rome, Meloni is deeply conservative, openly anti-LGBTQ, and has threatened to place same-sex unions, which were legalized in Italy in 2016, under review. She has also called abortion a “tragedy,” raising fears for the future of women’s rights in the country. Meloni entered Italy’s crowded political scene in 2006 and co-founded the Brothers of Italy in 2012, a party whose agenda is rooted in Euroskepticism and anti-immigration policies.

At least 7 children among the dead in Russia school shooting

At least seven children have been killed in a school shooting in the western Russian city of Izhevsk, Russian state media reported earlier today. Nine fatalities have been reported so far, according to Russian state news agency TASS. It is unclear if that number includes the attacker, who reportedly shot himself, the head of the regional government said.

Rosh Hashanah, the Jewish holiday that has been celebrated for over a thousand years, began on Sunday with prayer, traditions, and special foods. You may get a little hungry after looking at this delicious challah bread!

Needless to say, it’s going to be iconic. Here’s what we know about the popstar’s upcoming performance.

The world’s best airline for 2022 named

It’s been a bumpy year for the aviation industry, but experts say this airline remained first class amid the travel chaos.

Legendary singer Elton John recently performed a concert at the White House and was shocked to receive this special surprise from the President.

7 scenic drives across the US with picture-perfect autumn views

If you need a fall foliage fix, these places will not disappoint.

That was the value of the British pound today against the US dollar — a new record low after plummeting more than 4%. The unprecedented currency slump follows an announcement on Friday that the UK would impose the biggest tax cuts in 50 years at the same time as boosting spending. The previous record low for the pound against the dollar was 37 years ago in 1985 when 1 pound was worth $1.05.

“If he is the nominee, I won’t be a Republican.”

— Wyoming GOP Rep. Liz Cheney, vowing on Saturday that she plans to do everything she can to make sure former President Donald Trump is not the Republican nominee, should he run for President again. Cheney, the vice chair of the House select committee investigating the January 6, 2021, insurrection at the US Capitol, is gearing up for what’s likely to be the committee’s final public hearing this week before it releases its final report by the end of the year.

Watch this video to learn why this fluffy feline has the reputation of being the grumpiest cat in the world. (Click here to view) 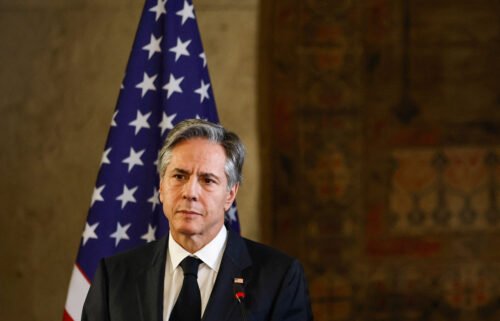