WESSESLEY, Massachusetts (WBZ) — Herlda Senhouse is a woman in demand on February 28th. It’s her birthday and this year, she turns 111 years old. To celebrate, the Town of Wellesley organized a small party in the lobby of Herlda’s apartment building (she lives largely independently) with friends and town officials.

After reading a proclamation in her honor, Wellesley Select Board Chair Thomas Ulfelder handed Herlda a bouquet of flowers and thanked her for the chance to celebrate her day. “It’s really an extraordinary honor,” he told her.

Behind her mask, Herlda was beaming. The secret to her longevity? “I don’t smoke or drink. And I don’t drink those fizzy waters … no soda. I seldom eat fast food. Other than that,” she told WBZ’s Lisa Hughes, “That’s it.”

But another defining aspect of Herlda’s well-lived life are her friendships. She says she met most of her friends in church or at the hairdresser. She met Margaret Robinson, one of her dearest friends, more than 60 years ago. Margaret calls at least once a day. Every two weeks, they get their hair styled and have their nails done. During the pandemic, the man who runs the salon often opened early so that Herlda and Margaret could—safely—enjoy their ritual with only the masked technicians in the space.

“We’re just like sisters,” Margaret explains. When asked what it’s like celebrating her friend’s 111th birthday, Margaret could hardly contain herself, “It gives me chills! It is absolutely marvelous!”

Delilah Callahan, who manages the apartment building and helped set up the party agrees. “It is so amazing! Amazing how she looks and how she is. She’s very witty. I can’t wait to hear all the stories when I know her better,” Delilah said.

For her part, Herlda downplays any notion that celebrating her birthday is a feat. “It’s just a number,” she chuckled. “I don’t feel any difference.”

But pushed a bit on the changes she has seen, Herlda described two of the biggest. “One thing I enjoy having is electric light because when we came along, we had those oil lamps. And I had to wash those globes. Did I hate that! And then having indoor plumbing. When my father built a house, he built with indoor plumbing. But then when I came north, my aunt and uncle didn’t have it.”

Herlda was born in West Virginia. Her mother died when she was four years old. Her father died when she was six—so long ago that she has no photographs of parents. She moved in with her aunt and uncle in Woburn and graduated from Woburn High School in 1931. She worked for families in Greater Boston and, while working for a family in Somerville, met her future husband, William Senhouse. He died in 1989.

Asked whether she feels good, she laughs. “That’s what they say—I’m healthy. I don’t know … because every day gets harder. Trying to do things around like fix a little meal or something. It’s pretty hard. I can’t do anything without my Cadillac,” she says pointing to her walker.

But she is a lifelong learner. At the age of 110, Herlda got her first computer and is eager to learn how to use it—mostly to play games like poker and bridge.

Two years into the pandemic (she says she doesn’t remember the 1918 pandemic because it didn’t affect her) she is ready to reclaim a sense of personal freedom. “I felt like I was in jail.”

When young people ask her for advice, she urges them to take the long view. “Don’t live life too fast…. If you want to live long, pace it.”

Herlda says the activities that make her happiest are joining friends for lunch and to the casino at Encore Boston Harbor. “I play a certain amount. And when that’s gone, it’s gone. I don’t play over my limit because I don’t have it.”

She is disciplined, funny and wise. “Just live your life the way you want to live it and be kind to people who have been kind to you.” 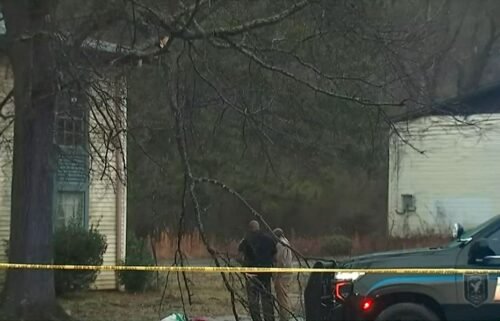