TONIGHT: Mostly cloudy with widespread rain and a few storms overnight. Lows in the mid-60s. 1-2" rain likely by Tuesday afternoon.

TOMORROW: Showers and storms likely. Rain could be heavy at times, especially in the morning. Highs near 70.

EXTENDED: We're tracking a complex of storms to the north this evening that will get enhanced by low level winds tonight, increasing the potential for heavy rain. Showers and storms become more widespread after midnight from north to south, and we'll definitely have a soggy commute with rain and storms continuing through at least mid-afternoon for areas along I-70. Rain doesn't completely exit for areas south of that corridor until Tuesday night, but the rain-cooled air keeps us at around 70 for a top temperature on Tuesday. Rain amounts will be in the 1-2" range with some locally higher amounts through Tuesday night. With the cold front to our south and upper winds flowing from the northwest, we can expect cooler than average temperatures all week with highs in the low 80s and lows in the low to mid- 60s.  Another series of cold fronts move through between Friday and the weekend, bringing a chance for scattered showers and storms by late Friday into Saturday, and potentially again into Sunday. That keeps us in the low 80s for the weekend. 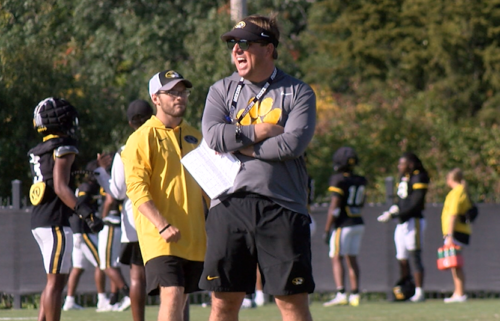