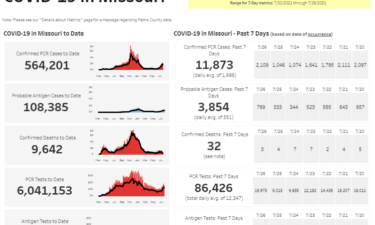 Get complete election results for Mid-Missouri counties and statewide races by clicking here.

Missouri Republicans have fought efforts to increase eligibility for the program for years. That pushed supporters to put it to a public vote. Missouri’s Medicaid program currently does not cover most adults without children, and its income eligibility threshold for parents is one of the lowest in the nation at about one-fifth of the poverty level.

Republican Willard Haley will take over the 58th House District seat being vacated by David Wood. The seat represents Morgan and part of Moniteau counties. Willard defeated Timothy Faber in the GOP primary and no Democrats are seeking the seat.

In the 124th House District, Republican Lisa Thomas won a five-way race to take over the seat now held by Rocky Miller. The district covers parts of Miller and Camden counties.

Jeff Stockhorst will be the next Eastern District commissioner of Howard County.

Stockhorst won a three-way race in the Republican primary for the seat.

In the Western District, Republican Matthew Freese will take on Randy McMillan in November.

Tristan Asbury will represent the GOP in November in the race for the Northern District seat on the Boone County Commission. Asbury won a four-way race, defeating Brenndan Riddles, Jim Musgraves and Sam Boyce. Asbury was also the top fundraiser in the GOP race.

A little-known candidate has won the Democratic primary in Missouri's heavily-Republican 3rd District.

The 3rd District stretches from the far western and southern suburbs of St. Louis west to the Lake of the Ozarks region. Luetkemeyer was first elected in 2008 after previously serving in the Missouri House and as director of the Missouri Division of Tourism.

Luetkemeyer has been a supporter of President Donald Trump.

Rezabek's Facebook page says she is focused on human rights, workers’ rights and addressing climate change. Her campaign website says she is a mother of two who also has participated in marches for women's rights.

UPDATE 9:50 P.M.: One incumbent Republican commissioner won and another lost in Cole County on Tuesday.

No Democrats are seeking either of those seats, making Hoelscher and Otto the presumptive winners in November.

Incumbent Republican Assessor Chris Estes will also keep his seat after winning a four-way primary in dominant fashion by taking 50 percent of the vote. No Democrat is seeking the seat.

All are Republicans -- no Democrats sought those seats.

Brian Stumpe won the Republican race for Division 5 associate circuit judge. He will take on Democrat Scott Evans in November.

Cole County voters came out strongly against Amendment 2, which would expand Medicaid in Missouri, with 60 percent voting no.

UPDATE 9:30 P.M.: Watch Republican Gov. Mike Parson give his victory speech in the player below.

UPDATE 9:25 P.M.: One Republican commissioner in Cooper County has been defeated and the other has retained his seat.

Western District Commissioner David Booker succumbed to a challenge from within his own party Tuesday night, losing to Danny Larm 1,065-849.

Melkersman meanwhile fended off a challenge from Dawn Kuster, winning by a 776-647 vote.

No Democrats are seeking those seats, making Melkersman and Larm the presumptive next commissioners in Cooper County.

Paula Sims won the Republican nomination for public administrator. She will face Wendy Wooldridge in November.

Hartzler, 59, of Harrisonville, defeated Neal Gist in the GOP primary. She will face Democrat Lindsey Simmons in November.

Hartzler has been a staunch supporter of President Donald Trump. She disclosed last month that her family’s businesses received nearly $480,000 from a federal program to help small businesses during the coronavirus pandemic.

The 4th District covers portions of central and western Missouri.

Graves, 56, of Tarkio, defeated Christopher Ryan in the primary election.

His 6th District covers the width of rural northern Missouri, from the Kansas border to the Illinois border.

The district has moved very conservative in recent years and Graves will be heavily favored in November against the winner of the five-person Democratic primary.

Luetkemeyer, 68, of St. Elizabeth, represents a district that stretches from the far western and southern suburbs of St. Louis west to the Lake of the Ozarks region. He was first elected in 2008 after previously serving in the Missouri House and as director of the Missouri Division of Tourism.

Luetkemeyer has been a supporter of President Donald Trump. He will face the winner of the two-person Democratic Primary.

Dennis Oglesby of Warrenton has worked in the print and promotional products industry for 16 years. He has said he believes government should be run sensibly and provide for the welfare of its citizens.

Oglesby’s opponent is Megan Rezabek, who has campaigned little but whose Facebook page says she is focused on human rights, workers’ rights and addressing climate change.

No Democrats filed for the commission seats, meaning Hoellering and Messerli are the presumptive next commissioners.

In the county's other contested race, Marcy Oerly scored an overwhelming victory in the Republican race for Assessor. Oerly defeated Bill Figgins -- the current interim assessor -- 2,209-727.

UPDATE 8:20 P.M.: With 40 percent of the precincts reporting in Callaway County, the incumbent has a large lead in the race for Western District commissioner.

Roger Fischer was leading the Republican race for the seat over challenger Will Shackelford by a 400-270 margin with four of the county's 10 precincts reporting.

No Democrats are seeking the seat so Tuesday's winner will be the presumed next commissioner.

Callaway County's voters were also coming out in heavy favor of Amendment 2, which would expand Medicaid in Missouri to cover more working adults. With four precincts reporting, 1,404 yes votes had been cast compared to 1,198 no votes.

ORIGINAL: The polls have closed and Cole County is reporting its first election results.

The Cole County Clerk's Office reported 2,063 absentee ballots cast. Two of the big races on the county's ballot are the Republican races that will decide two county commission seats.

Incumbent Jeff Hoelscher had a lead over challenger Rick Mahalevich in the commission's Eastern District race. In the Republican contest for the Western District, challenger Harry Otto was ahead in a three-way race. Incumbent Kris Scheperle was in second place.

Cole County's absentee voters came out in heavy favor of Amendment 2, which would expand the state's Medicaid program to cover more working adults. Of the 2.003 absentee votes cast on the ballot measure, 1,271 were in favor. 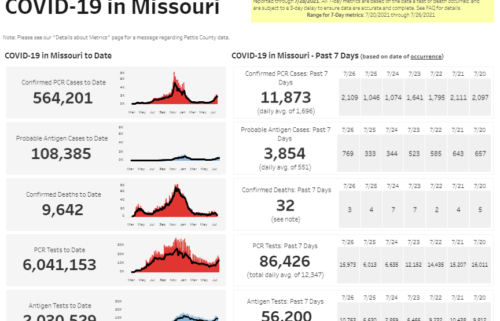