Two former top Trump administration officials testified before Congress on Wednesday about the Capitol insurrection, dodging questions from Democratic lawmakers about the attack while Republicans at the hearing used their time to criticize the government’s investigations into the rioters and question the existence of the insurrection itself.

Former acting Secretary of Defense Christopher Miller issued a strong broadside against criticism lobbed at the US military for not responding to the attack, saying at one point: “Criticism of the military response is unfounded and reflects inexperience with or a lack of understanding of the nature of military operations, or worse, is simply the result of politics — I suspect a combination of both these factors.”

He added: “This isn’t a video game, where you can move forces with the flick of a thumb or a movie that glosses over the logistical challenges and the time required to coordinate and synchronize with the multitude of other entities involved, or with complying with the important legal requirements involved in the use of such forces.”

House Republicans spent much of their time downplaying the violence on January 6.

Arizona Rep. Paul Gosar issued a full-throated defense of the rioters as he attacked the ongoing federal investigations into the participants of the insurrection.

“Outright propaganda and lies are being used to unleash the national security state against law-abiding US citizens, especially Trump voters,” Gosar claimed. “The FBI is fishing through homes of veterans and citizens with no criminal records and restricting the liberties of individuals that have never been accused of a crime.”

“The government has enlisted Americans to turn in their own neighbors,” the Arizona Republican added.

Another GOP member, Rep. Andrew Clyde of Georgia, falsely compared the riot to a tourist visit.

“But let me be clear, there was no insurrection and to call it an insurrection, in my opinion, is a bald-faced lie. watching the TV footage of those who entered the Capitol and walk through Statuary Hall showed people in an orderly fashion staying between the stanchions and ropes taking videos and pictures, you know, if you didn’t know the TV footage was a video from January the sixth, you would actually think it was a normal tourist visit,” the congressman said.

“In my career as a judge and in law enforcement, I have not seen a more dangerous threat to democracy than the invasion of the Capitol,” Garland said.

“This was an attempt by some — I don’t want to be very careful to not ascribe it to all, because every case is individually decided — but there was an attempt to interfere with the fundamental passing element of our democracy: the peaceful transfer of power,” Garland said.

Rosen engaged in a tense back and forth with Democratic Rep. Gerry Connolly.

“Prior to January 6, were you asked or instructed by President Trump to take any action at the department to advance election fraud claims or to seek to overturn any part of the 2020 election results?” the Virginia Democrat asked.

“I can tell you what the actions of the department were,” Rosen replied, adding: “I cannot tell you consistent with my obligations today about private conversations with the president one way or the other.”

“You’re saying this is a privileged communication?” Connolly shot back.

“I’m saying that my responsibility is to tell you about the role of the Department of Justice and the actions we took,” Rosen said, to which the congressman responded: “No, sir, your responsibility is to be accountable to the American people and this Congress. I can’t imagine a more critical question.”

Miller compares idea of military at Capitol to Kent State

Miller invoked the Kent State massacre on Wednesday as he justified why he didn’t believe the US military should have responded to the Capitol insurrection, saying he sees the nation’s armed forces “as a last resort” when responding to protests.

“Historically, military responses to domestic protests have resulted in violations of Americans’ civil rights, and even in the case of the Kent State protests of the Vietnam War, tragic deaths,” Miller told the panel. “In short, I fervently believe the military should not be utilized in such scenarios other than as a last resort and only when all other assets have been expended.”

The May 4, 1970 incident at the university involved the Ohio National Guard firing on students as they protested against the Vietnam War. Four students were killed, while nine were injured in a massacre that dramatically changed the nation.

The former acting defense chief was also repeatedly pressed by Democrats on his communications with then-President Donald Trump and then-Vice President Mike Pence as the riot unfolded.

Miller said he didn’t speak to Trump at the time because he believed he had “all the authority” he needed to “fulfill (his) constitutional duties,” adding he didn’t speak with the President at all that day.

Miller did say he spoke with the then-vice president briefly, but disputed the idea that Pence told Miller to “clear the Capitol.”

“The Vice President’s not in the chain of command. He did not direct me to clear the Capitol. I discussed very briefly with him the situation. He provided insights based on his presence there, and I notified him, or I informed him that, by that point, the District of Columbia National Guard was being fully mobilized and was in coordination with local and federal law enforcement to assist in clearing the Capitol,” Miller said.

At another point during the hearing, Miller became especially defensive when Rep. Rho Khanna asked if the former official would “at the very least apologize to the American public for what happened on your watch.”

Miller started to reply by praising “the incredible job” performed by members of the armed forces, but was cut off as the California Democrat again asked if he wanted to issue an apology.

“The Department of Defense and our members of the armed forces performed magnificently on January 6,” he said, adding later: “I stand by every decision I made on January 6.”

CORRECTION: A previous version of this story misquoted Rep. Andrew Clyde’s comments about the insurrection. This story has also been updated with additional information and reaction. 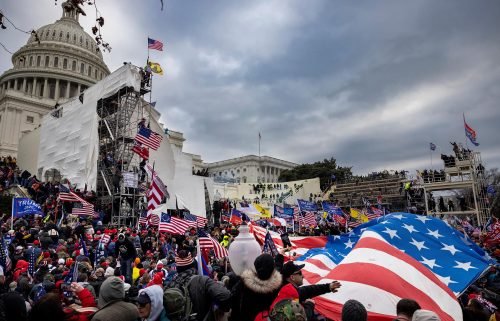