The Biden administration has secured agreements for Mexico, Honduras and Guatemala to tighten their borders and stem the flow of migration, Special Assistant to the President for Immigration for the Domestic Policy Council Tyler Moran told MSNBC on Monday.

“We’ve secured agreements for them to put more troops on their own border. Mexico, Honduras and Guatemala have all agreed to do this. That not only is going to prevent the traffickers, and the smugglers, and cartels that take advantage of the kids on their way here, but also to protect those children,” Moran said.

The Biden administration has struggled to keep up with the influx of migrants coming to the US southern border, particularly unaccompanied minors, who have languished in Border Patrol stations as officials scramble to find sites to accommodate them.

Moran also outlined a two-pronged approach to address the situation at the border, including processing unaccompanied minors safely in the US and addressing the reasons why people migrate to the US.

“We’re addressing the reasons that people are coming from the region. This is really important. If you just focus on our border, you’re not addressing why people are actually coming to our border. The President has a blueprint and he’s working with the vice president on this,” Moran said, citing in part investments in the region.

US Customs and Border Protection apprehended more than 172,000 people attempting to cross the US-Mexico border in March, a 71% increase from February, according to the agency’s data.

While the majority of encounters along the border were single adults, who are being expelled under the public health order, CBP apprehended a record number of unaccompanied minors, with 18,890 in March, nearly double that of February.

Harris has since spoken with President Alejandro Giammattei of Guatemala and discussed increasing humanitarian assistance to Guatemala, Honduras and El Salvador, as well as exploring opportunities to create jobs and improve conditions for people in the region, according to a White House readout. Harris also thanked Giammattei for his efforts to secure Guatemala’s southern border.

Administration officials have repeatedly underscored the importance of addressing root causes of migration and improving conditions in home countries.

Last week, the US Agency for International Development announced it was deploying a Disaster Assistance Response Team to respond to urgent humanitarian needs in Guatemala, Honduras and El Salvador.

“USAID leads the U.S. Government’s humanitarian response to mitigate the impact of recurrent drought, severe food insecurity, and the ongoing COVID-19 pandemic especially in communities still recovering from back-to-back hurricanes that hit just four months ago. We are deploying a Disaster Assistance Response Team, or DART, which comprises disaster experts from USAID focused on rapidly scaling up emergency food assistance, programs to help people earn an income, protection for the most vulnerable, and other critical humanitarian programs,” the statement read in part.

The Biden administration has also placed around 28,000 radio ads in Latin America as part of a stepped-up campaign to discourage people from journeying to the US.

The spots, which are recorded in Spanish, Portuguese and six indigenous languages, have reached at least 7 million Central American radio listeners via 133 radio stations, according to a State Department spokesperson, who added the scripts are derived from real-life testimonials. The US is also using social media to relay the administration’s message.

This story has been updated with additional details Monday. 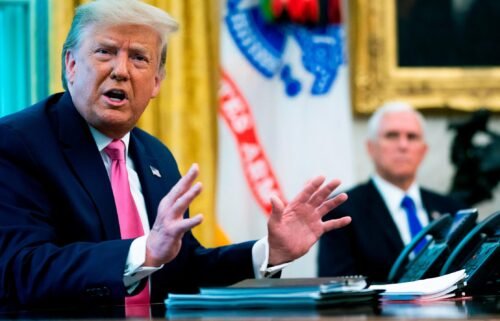