Just over a decade ago, the Palestinian flag hung alongside Israeli and American flags at the Israeli prime minister’s residence, when Benjamin Netanyahu and Palestinian Authority President Mahmoud Abbas shared a historic handshake.

Today, Netanyahu is back in power and Abbas never left, but many other things have changed, including Israel’s attitude toward the Palestinian flag.

This month, new Israeli National Security Minister Itamar Ben Gvir ordered police to take down Palestinian flags in any public place in Israel, claiming they are a rallying symbol for terrorists.

At least one artist felt forced to respond to Ben Gvir’s decree.

As soon as he heard about the minister’s order, Tel Aviv-based visual artist Michael Rozanov drew himself in the colors of the Palestinian flag and made the artwork his Facebook profile picture.

“It’s ridiculous, you want to take down flags? What if I am a flag, what would you do? Would you put me down because I’m wearing certain colors?” said Rozanov, known as Mysh. “So I drew this illustration that took me 10 minutes.”

He didn’t expect it to attract much attention, but dozens of Israelis joined Mysh, asking him to draw their profile pictures with the Palestinian flag in the hope of making some impact.

“And then I thought, yeah, it would be nice to offer other people to join in. Because I like drawing and I like starting something online,” Mysh told CNN .

Naturally, he also drew Ben Gvir clothed in the colors of the Palestinian flag, right up to his kippa, the skullcap worn by religious Jews.

Mysh is far from the only Israeli unhappy with Netanyahu’s new government. The prime minister’s right-wing coalition won a slim majority of the popular vote in November’s elections, but critics and opponents object to a wide range of its moves, including the Palestinian flag public ban, increased deference to the ultra-Orthodox and plans to change the judicial system.

More than 100,000 people turned out in Tel Aviv on Saturday night, the latest — and largest — in a series of weekly protests against legal reforms Netanyahu’s allies are planning.

But not all Israelis welcomed Mysh’s drawings.

One commenter on Facebook accused Mysh of “spreading a flag of hate,” adding: “What a bummer.”

Another said: “What does this want to say? That it is now cool to belong to a nation that has surrendered to its terrorist leaders? Hamas doesn’t want peace with us, what’s not clear?”

Mysh made a point of replying to each comment to explain and even try to convince his critics.

But he believes that Ben Gvir’s attempt to publicly ban the Palestinian flag — which is technically legal to fly in Israel — is a continuation of the direction Israel has been moving toward since its founding in 1948.

“It’s definitely a step forward for the craziness, but nothing surprising,” Mysh said. “I think what we see now is the shattering of this illusion that most Israelis try to maintain, that they can live in a liberal democracy that respects all human rights, while simultaneously robbing five million people more of the same basic rights,” he said, referring to the Palestinian population.

An artist who uses different media — film and animation, illustration and comics — to address social and political issues, as well as sexuality and gender, Mysh came to Israel as a teenager from Latvia in 1993 and served in its army for three years.

But one day doing his reserve service at an Israeli checkpoint in the Jordan Valley, he says he had a powerful insight into the Palestinian experience.

“The only reason that checkpoint existed was to make the life of the people in the village more difficult,” Mysh said. “We were checking the same people twice every day. They were mostly mothers who take their children to kindergarten on the other side of the village.”

“There was a day when I was standing there with my gun and another soldier was checking ID cards, and suddenly I realized that I am a grown-up man who points a gun at a 3-year-old child. And I say to myself: ‘I’m not really pointing at him. I’m just standing like this.’ Yeah, but he doesn’t know that. What he sees is this scary creature pointing a f**king gun.”

“It suddenly hit me, the perspective of the other side, which is this child that twice a day sees this monster pointing a gun at him. What are the chances that this child grows up being ready to see me as a human being as I am? How can I expect him to perceive me as a human being? Then I decided I’m out of this. I’m not doing this anymore,” Mysh said.

Mysh sees a direct connection between Israel’s military checkpoints and Ben Gvir’s attempt to essentially ban the Palestinian flag, which is likely to be tested in court.

“Every oppressive system is a weak system because it can’t withstand any friction,” Mysh argued. “It needs to enforce a huge amount of violence to avoid friction.”

That is what Ben Gvir is trying to achieve, Mysh said: “It is an idea that in order to achieve our national identity, we need to take it away from other people.”

Finland’s Foreign Minister Pekka Haavisto told CNN on Tuesday the country’s joint NATO membership bid with Sweden is delayed amid reignited tensions with Turkey. “Of course, this is not good news,” he said. The delay follows protests in Stockholm over the weekend that included the burning of a copy of the Quran.

Lebanese judiciary officials clashed on Tuesday over the reopening of an investigation into the 2020 Beirut port explosion. The inquiry was reopened by judge Tarik Bitar on Monday, but was rejected by Attorney General Ghassan Oweidat, who insisted that the investigation remains suspended and that no decision had been taken on whether Bitar could continue investigating.

Israeli Prime Minister Netanyahu on Tuesday held talks with King Abdullah in Jordan. The visit comes amid heightened tensions between the two countries over a Jerusalem site holy to both Muslims and Jews over which Jordan has custodianship in Israeli-occupied East Jerusalem.

Jenner revealed her 11-month-old son’s name to the public on Sunday. Arabs swiftly took to social media to poke fun at it. The name, Aire, means penis or ‘my penis’ in Levantine Arabic, and is often used as profanity.

“Umm should someone tell Kylie Jenner she renamed her son Aire which is a common Arabic expression for ‘my penis’ or nah?” tweeted journalist Antoinette Lattouf to her 13,000 followers.

Even the head of the American-Arab Anti-Discrimination Committee (ADC) weighed in.

“Arabic speakers are having a field day with this. The Arabic language is full of beautiful words, many of them are used for names,” Abed A. Ayoub, national executive director of the ADC, tweeted in jest to his 15,000 followers. “I hope he doesn’t have any Arab friends when he’s older.”

Jenner, 25, is mother to Aire Webster and 4-year-old Stormie Webster.

This is not the first time such a name made news in Levantine countries, which include Lebanon, Syria, Jordan and the Palestinian territories.

In 2012, Arabic news outlets found themselves in a tough spot when Jean-Marc Ayrault became the prime minister of France. The French pronunciation of his name also means “his penis” in Levantine Arabic. Many Arabic outlets chose to pronounce his name with the L, which is meant to be silent.

CNN Arabic similarly decided to transliterate Ayrault’s name as it is written, with last two letters, rather than how it’s spoken.

The French foreign ministry at the time said it was aware of the issue but had no comment.

Photo of the day

Correction: An earlier version of this story incorrectly spelled the artist’s last name. It also incorrectly reported the year he came to Israel, as well as his country of origin. 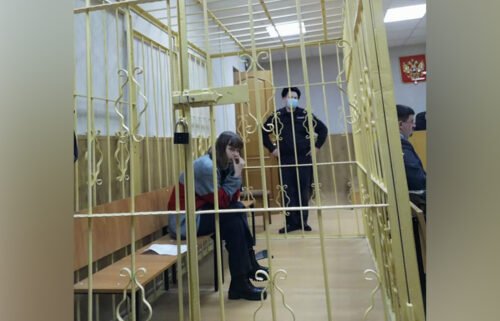 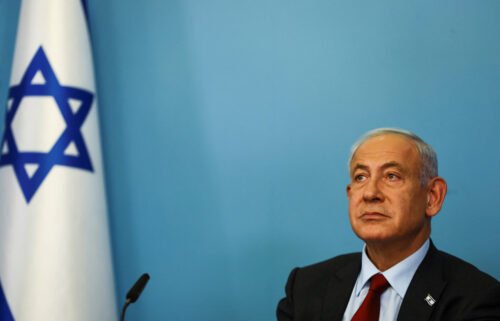