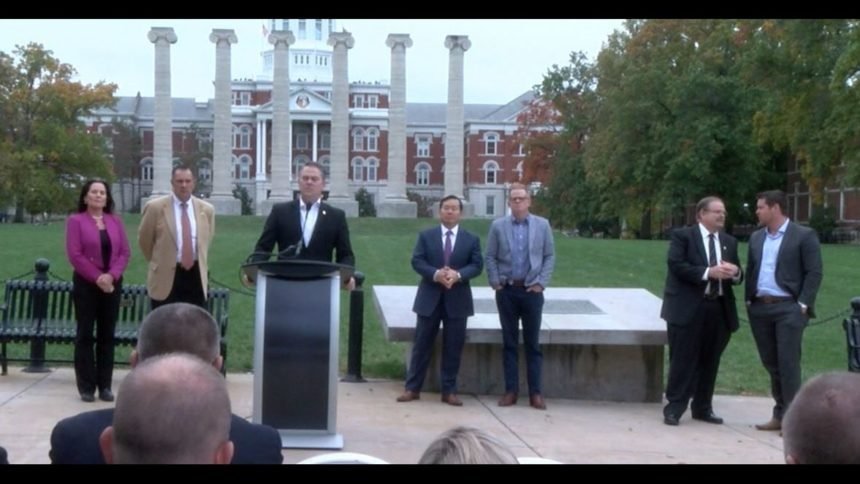 A state public and private committee gave its final report on bringing the Virgin Hyperloop One to Missouri.

The Blue Ribbon Panel on Hyperloop outlined impacts the high-speed rail system could have on the state. Its report shows Hyperloop would benefit Missouri with $1.67-billion to $3.68 billion of annual economic impact, create between 7,600 and 17,200 jobs, increase real estate value, increase impact from a variety of industries, added tax revenue, and a reduction in carbon monoxide emissions.

The state speaker of the house was joined by other state leaders on the University of Missouri campus for an announcement on the report Monday. State Rep. Elijah Haahr spoke on MU's quad Monday afternoon. University of Missouri System President Mun Choi, state sen. Caleb Rowden were also in attendance at the event.

"It really is something a leading research university should embrace," Cartwright said.

According to the report, the certification track must include a change in elevation and at least one significant curve. The panel reported that Missouri could be the leader in Hyperloop research if the state constructs the certification rail.

The report suggests state agencies and private companies should partner together in construction of the Hyperloop track. The proposed public and private partnership would reportedly mitigate the risk to​​​​​​​ taxpayer dollars.

Research on the Hyperloop would be led by the University of Missouri System if the state constructs the rail. UM would establish the International Tube Transport Center of Excellence. The research agency would allow MU students to research the Hyperloop. Reports show the ITTCE could build relationships between the university, industry and governmental leaders.

The report outlines other universities MU could partner with for the research. The University of Illinois Urbana-Champaign, Purdue University and Washington University in St. Louis are among those ​​​listed as possible partners.

You can read the full 173-page report by clicking on the file below.