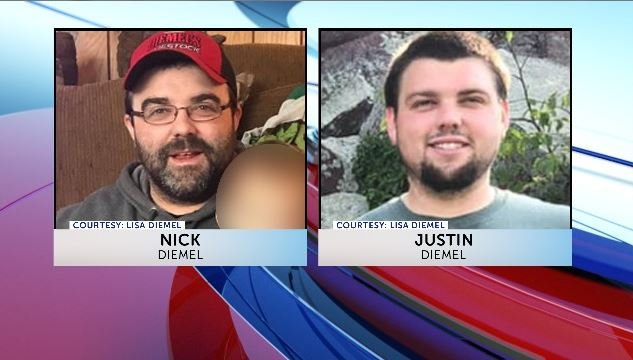 Human remains discovered in a Nebraska stock trailer appear to be from one of two Wisconsin brothers who were fatally shot by a Missouri farmer, authorities said Monday.

The Lincoln County sheriff's office in North Platte, Nebraska, announced that a local rancher found the remains mixed with dirt in a plastic tub inside the trailer.

"We believe it probably is one of the brothers," said Roland Kramer, the department's chief deputy.

The rancher had just bought the trailer through an online ad from a seller in Missouri, Kramer said. He added that Lincoln County officials seized the trailer for possible use as evidence and would work with Missouri authorities as requested.

Garland Nelson, 25, of Braymer, Missouri, is accused of fatally shooting 35-year-old Nick Diemel and 24-year-old Justin Diemel, of Shawano County, Wisconsin, then burning their bodies and dumping them in a manure pile.

Jack Diemel, the brothers' father, said the two had traveled to Nelson's farm to collect on a $250,000 debt, according to court records. The father reported his sons missing July 21 after they failed to show up for a flight home to Milwaukee and did not answer their phones.

According to a probable cause statement, Nelson shot the brothers, put their bodies in 55-gallon barrels and used a skid loader to move them one at a time from a barn to a pasture. There, he allegedly burned them using diesel fuel and an unknown liquid. Nelson told investigators he then dumped the remains on a manure pile and hid the barrels elsewhere on his property, about 70 miles (110 kilometers) northeast of Kansas City, Missouri.