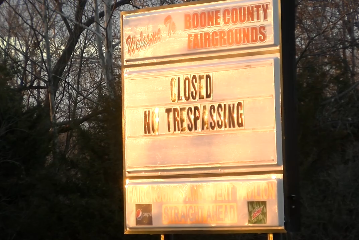 The Boone County Fair will return to Columbia in 2020 after news that the county will transfer the old fairgrounds to the city of Columbia.

"We're just grateful for Sturgeon and what they have done for us and helped us through these past four years, and helped us continue the tradition of having the Boone County Fair. But now we're excited to finally bring it back to town," Cook said.

On Thursday the city and county announced the county would give the Boone County Fairgrounds to the city in a deed. The city plans to turn the land into a recreation complex, but as part of the deal will set aside 29 acres for the fair to use.

The fair has been in Sturgeon on 21 acres since 2016. Before that, it was held at the fairgrounds, located just north of Columbia.

Cook said the announcement was one of the deciding factors to move the fair back to Columbia after Parks and Recreation reached out to the board.

"It's an excellent marriage for everybody. It's a good fit. It's just meant to be, so we're just really excited about it" he said.

Cook said the fair could have a different look for the next few years.

"Right now Columbia Parks and Rec is going to leave the fairgrounds the way it is, possibly until 2022. So the Boone County Fair gets to use the entire fairgrounds as it lays today," he said.

He said in 2022 the fair may move to the 29 acres that were set aside for the fair. This would require the fair board to relocate livestock barns and grandstands.

Cook said the fair had more success in Columbia than in Sturgeon.

"We've been in Sturgeon for four years and we've tried different activities to try to draw Columbia people up to Sturgeon. They just have it in a mindset that it's just too far north," he said.

"We just never could compete with the numbers that we can here in town," he said.

Cook said the fair board is currently waiting on a contract with Veterans United, which signed a lease to use part of the fairgrounds. The contract would allow the fair board to use the coliseum during the fair.

In a statement to ABC 17 News, Veterans United spokesman Chris Cline said the company looks forward to working with the city and county.

"Since 2016, Veterans United Home Loans has expended more than $500,000 for renovations, maintenance and repairs to the property. The Central Missouri Events Center has been an ideal location over the past seven years for us to hold company events for our more than 2,400 Columbia-based employees. It has also proven to be a great location for our local law enforcement and military to use for training. If approved, we look forward to working with both the county and city through the transfer of the property to the benefit of the community. "

Cook said the next step is to walk through the property and look at what needs to be repaired because much of the fairgrounds has sat vacant for several years.