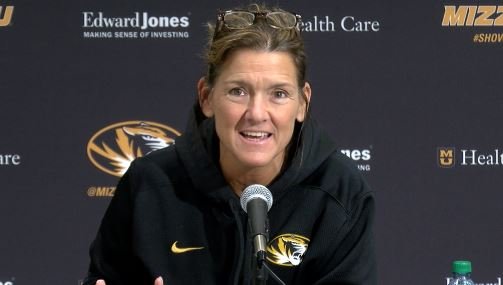 The Mizzou women's basketball team will host Princeton on Wednesday at 7 p.m.

We spoke with head coach Robin Pingeton and the Tigers on Tuesday to preview the matchup. Coach Pingeton said the team has really struggled with turnovers, transition defense and rebounding this season.

"Those are effort based things. We've got to find a way to gang rebound and really value that ball," Pingeton said. "We've taken some pretty tough hits. The good news is we're not far away. We've been in every game."

Mizzou is 3-8 on the season. Meanwhile, Princeton is 9-1. The Tigers are led by Bella Alarie, who's averaging 17 points and seven rebounds per game.

"I mean it's been tough. I hate to lose along with everyone on this team," Freshman guard Hayley Frank said. "No one likes it or is happy with losing, but it's kind of something we've had to embrace right now, and we just have to keep doing the little things and grinding away. I've definitely seen a lot of progress. I think there was a lot of progress in the last game, and so we just have to keep building on that, and we can't take steps backwards."

Coach Pingeton said she's had several conversations with the team about overcoming adversity. She referenced the 2019 Stanley Cup Champion St. Louis Blues as a prime example of a team turning its season around.

"Absolutely, you know I think perspective is everything and understanding you know this isn't a seven game season." Pingeton said. "We're about a third of the way through our season, and there's still a lot of opportunities out there, and if we start to hang our heads or feel sorry for ourselves, we don't have a chance in heck."

Senior Amber Smith said the team is responding well to this message.

"I think in sports we write our own story over and over," Smith said. "We might have a rocky start, but it's all about how we finish, and we just want to be remembered for being that gritty team that fought the whole season. It's only 11 games in. We still have time."