Tropical Depression Nicholas has stalled and is threatening to bring dangerous flash flooding along the central Gulf Coast over the next few days — including in Louisiana, which still is staggering from the devastation of last month’s Hurricane Ida.

Nicholas dropped heavy rain Wednesday in parts of Louisiana, Mississippi, Alabama and the Florida Panhandle after making landfall as a Category 1 hurricane early Tuesday in Texas.

“The depression is currently stationary, but is expected to gradually move northward over the next couple of days,” the National Weather Service Weather Prediction Center said.

About 2 to 8 more inches of rain could fall in parts of those Gulf Coast states through Friday with the heaviest rainfall near the coast, forecasters said.

That’s on top of the 1.6 to 10.6 inches that this storm dumped on Louisiana before Wednesday.

Flash flood watches are in effect from Louisiana — including the New Orleans area — to the Florida Panhandle.

Louisiana has not yet fully restored power after Ida, a Category 4 storm, made landfall on August 29. New Orleans still was working to clear excess trash from the Ida, with about a third to go, city spokesperson Beau Tidwell said Tuesday.

New Orleans Mayor LaToya Cantrell issued a statement Wednesday regarding the city’s trash issue, saying “all neighborhoods are a priority and the City remains focused on identifying the equipment and labor needed to solve this problem.”

According to the mayor, solid waste collection was already a challenge before the storm due to the national Covid-related labor shortage.

As of Wednesday night, about 56,000 homes and businesses were without power in Louisiana, according to PowerOutage.us.

Ida and the conditions that followed are blamed for at least 29 deaths in Louisiana, with the latest fatality announced Tuesday by Gov. John Bel Edwards. Excessive heat is responsible for 13 deaths, while six people died from carbon monoxide poisoning, he said.

Nicholas came ashore with 75-mph winds early Tuesday near the eastern part of the Matagorda Peninsula, about 10 miles west-southwest of Sargent Beach, Texas.

Nicholas drenched Houston, dumping more than 6 inches of rain since Sunday, the National Weather Service said. Nearly 10 inches of rain fell in Deer Park, Texas. As of Wednesday night, about 62,000 Texas homes and businesses were in the dark, according to PowerOutage.us. 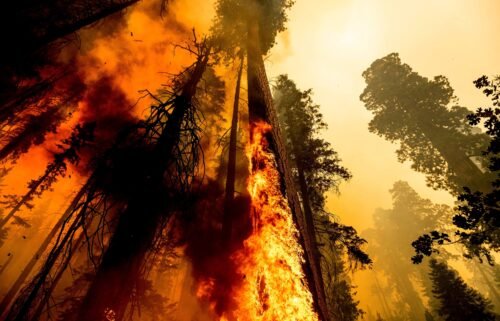