CULVER CITY, California (KABC) — She was a daughter, sister and a standout volleyball player who lost her life too soon.

On Saturday, friends and family held a vigil in Culver City for 18-year-old Daina Monroe, who was lovingly known as Gucci.

The teen was killed in a drive-by shooting on Monday. Her family said she was with her friends and one of her sisters. The group was sitting in a car outside of her mother’s home in Inglewood, trying to decide what movie they should watch, when someone drove by and began shooting at their car.

“For me, it’s about trying to find justice for who did this to her,” said Shean Villa, a friend of Monroe. “It was nonsense. She had no connections to anybody. She was going to start her life.”

Friends and family honored the teen on Saturday with flowers and candles. The young athlete dreamed of going to the Olympics and played professional volleyball.

Thirty-two colleges wanted to recruit her, but she eventually chose Monroe College in New York. She recently decided to leave school and came back home to her family last month. Monroe went to Culver City and Santa Monica high schools.

Her dedication on and off the court was well known and so was her smile and sense of humor.

“It meant a lot to me to see all these people here for her,” said friend Ghalia Warren. “She would’ve loved this. Everybody cared about her so much, and she cared about everybody else.”

Meanwhile, the search for her killer continues, and her family is begging for anyone with information to come forward. 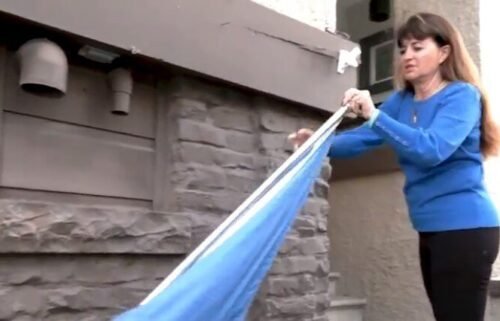