The team planning for President Donald Trump’s impeachment trial in the Senate believes there are “significant and important” executive privilege issues regarding the potential testimony of former national security adviser John Bolton, according to a source familiar with the team’s discussions.

The source told CNN on Friday that the Senate trial team sees Bolton’s possible testimony as going “to the heart” of the President’s constitutional powers under Article II.

Bolton shook the capital earlier this week when he said he is prepared to testify at Trump’s impeachment trial, should he be subpoenaed to do so. Bolton issued a statement Monday after the courts did not rule on whether he would be compelled to testify during the House’s impeachment proceedings, saying he was trying to meet his “obligations both as a citizen and as former national security adviser.”

“Accordingly, since my testimony is once again at issue, I have had to resolve the serious competing issues as best I could, based on careful consideration and study,” Bolton said. “I have concluded that, if the Senate issues a subpoena for my testimony, I am prepared to testify.”

The former national security adviser would be a critical witness due to his firsthand knowledge of many of the events that led to Trump being impeached over his dealings with Ukraine. The President was impeached in December on two articles: abuse of power, for pressuring Ukraine to announce an investigation into Joe Biden’s son, Hunter Biden, and obstruction of Congress, for ordering multiple top officials in his administration to ignore subpoenas for their testimony in the probe and ignoring subpoenas for relevant documents.

The source said there has not been a decision yet on whether to invoke executive privilege on any potential testimony from Bolton because it’s not confirmed that he will testify. Senate Majority Leader Mitch McConnell has indicated that he is postponing the decision on whether to call witnesses in the trial until later on in the process.

But Trump himself said on Friday in an interview with Fox News that he would likely invoke executive privilege if Bolton were subpoenaed. Trump said he was keeping an eye on the historical implications of allowing Bolton to testify and that, for the sake of future presidents and their ability to have confidential discussions with advisers, he’d invoke privilege on Bolton.

“I think you have to for the sake of the office,” the President said in the interview.

In a news conference on Thursday, Trump made a similar statement when he asserted that he “would have no problem” with Bolton testifying if not for “presidential privilege.”

“I always got along with him, he didn’t really get along with some of our people, but that’s really going to be up to the Senate,” Trump said. 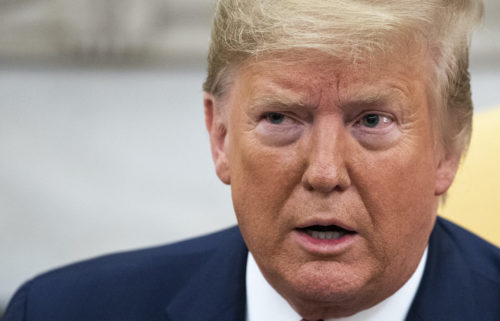